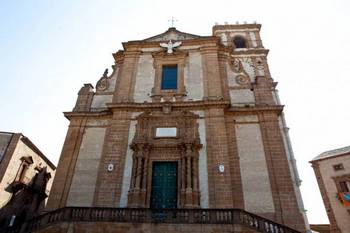 From then on, the Bourbon family of Spain took possession of Sicily, and it was ruled from Naples.
The first King was Charles VII, and his rule proved to be quite good for both Naples and Sicily. With the help of the Tuscan Marquis Bernardo Tanucci, he carried out a policy of reforms against the Baronsâ privileges. He improved agriculture, industry and  business, and introduced in Sicily a new taxation system, and for the first time the income was almost entirely assigned to the islandâs needs. King Charles VII married Amalia of Saxony and she brought some splendid china among her bridal trousseau. The King liked it so much, that he wanted to start the same type of production in Naples. And he actually began a few experiments in his own courtyard. He found in some kaolin caves in Calabria, more or less similar to the quality of the Saxony ones. Nobody helped him because of the risks of possible competition, and he had to corrupt a few employees from the Viennese porcelain factories, paying them quite a lot of money.

After this the Neapolitan artists reached a very high degree of perfection, so much so that nowadays they are famous all over the world producing under the name of "Capodimonte" porcelain. Charles built the Royal Palace in Naples and, coming from France, he also wanted a beautiful residence in the countryside, similar to the Versailles one. The Neapolitan architect Vanvitelli built for him the splendid Royal Palace of Caserta. Although he could not enjoy it for long as in 1759 he had to leave Naples to be crowned King of Spain as Charles III.

He left his son in Naples, Ferdinand IV, only nine years old. The Kingdom of Naples and Sicily was ruled then by the same clever Prime Minister Tanucci, under the supervision of King Charles from Spain. Even the the young Kingâs wife was chosen by his father.
Her name was Mary Caroline, daughter of Empress Mary Therese of Austria and sister of Marie Antoniette of France. She had quite a strong temper, and very soon she dismissed Bernardo Tanucci. Ferdinand IV, the so-called "Re Nasone" or big-nosed king, was very weak, even though he was very popular with Neapolitans, as he was always an informal and easy going person.
The poor King was really overwhelmed between his fatherâs orders from Madrid and his wife's counter-orders!

In the meantime, Europe was shaken by the French Revolution. In 1793, the French King Louis XVI was executed together with Queen Marie Antoinette, sister of Mary Caroline. Both the King and Queen were very afraid in Naples, and in 1798 they left Naples in order to seek refuge in Palermo.
The Sicilians once more welcomed their King as Ferdinand III of Sicily, but they were soon very disappointed. The King did not come to stay in Sicily, but only to organize the re-conquest of Naples. The Neapolitans in fact had proclaimed it as the independent Parthenopean Republic, which was quickly invaded by the French.

King Ferdinand re-conquered Naples, where he massacred hundreds of Neapolitans. Then he signed a neutrality treaty with Napoleon, which he did not respect  and he immediately started to re-arm. Napoleon then reinstated the Kingdom of Naples, with his brother Joseph as King, in 1806. For the second time King Ferdinand rushed down to Palermo, while the English imposed their own protection over Sicily against Napoleon, from 1811 to 1814. They even sent an English dictator as Prime Minister, with an imposing army to defend themselves.
The Queen did not like it, so she was sent into exile by the English Government, and died in Austria in 1814.

King Ferdinand III was forced to approve the Constitution, based on the English one. Meanwhile Napoleon was defeated for ever, and the Bourbons were reinstated in France under Louis XVIII. Ferdinand IV of Naples and III of Sicily, became Ferdinand I of the Two Sicilies in 1816, once more unifying the two Kingdoms. At this point, a funny joke went around about the King: Fosti QUARTO, e insieme TERZO Ferdinando, or sei PRIMERO; e se seguita lo scherzo finirai per esser ZERO.

(You were Fourth and Third together, Ferdinand, now you are First; if the trick will still go on, you will end up to be Zero).

The real meaning of this new title was just an excuse to cancel the autonomy and the new Constitution in Sicily.
Sicilians then reacted greatly, especially when they heard that the King had granted the Neapolitans a new Constitution under the pressure of Neapolitan revolutionary groups. Consequently, a civil war broke out all over Sicily. In Palermo they started an independent movement to separate the island from the Kingdom of Naples. Ferdinand I called in the Austrians, and with their help restored the monarchy. In 1825 he died, and his son Francis I carried on the same conservative policy for the next five years of his reign. His successor was his son Ferdinand II, who had to face the 1848 insurrection which spread out from Palermo throughout Sicily.
All Bourbon troops were expelled, and Sicily was ruled by the Palermitan Ruggero Settimo as President of the new Government.

On April 13, 1848 the Bourbon monarchy was solemnly discharged. The King reacted swiftly from Naples, and sent down a very well organized army of 16,000 men, including two Swiss regiments. The battle started in Messina, which was almost destroyed after a fierce resistance, with bloody killings and terrible offences even towards Sicilian corpses. Cannons were also used by the Kingâs troops, and Ferdinand was nick-named "Re Bomba", the bomb king. After a furious and heroic resistance, Catania underwent the same unhappy fate.

Again Sicily was a battlefield, but this time people were fighting for their own freedom. In Palermo, the Bourbon King sent a proclamation to the local municipality. With the promise of an amnesty for everybody, except the insurrectionâs leaders. But when the people saw battleships in front of the harbour, nobody believed it anymore. Three days of resistance started in Palermo but, in the end, it had to surrender too. All hope of Sicilian independence, at that moment, vanished. It was now clear that the only solution was the unification of Sicily to the Italian peninsula.The risings of 1854, 1856 and 1859 paved the way for the legendary Garibaldi expedition.