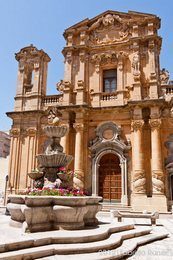 Soon afterwards, Sicily offered the crown of the Kingdom to the Spanish King, Peter III of Aragon, who was married to the daughter of Manfredi.
Five months later, Peter III landed in Sicily taking the Kingdom without any resistance. From this time on, Sicily was separated from the rest of Italy.

The French Angevins from Naples and the Spanish Aragons from Sicily, started a long and disastrous war, which lasted for over 90 years under different rulers. When Peter III and Charles Anjou died, the war continued with their sons, James II Aragon and Charles II Anjou. But at this point, the Aragons were not interested in Sicily, as they had to fight against the Angevins, against France and against the Pope at the same time. In 1295, James II gave back  the island to the Angevins, under Pope Bonifacio VIII's rule.

The Sicilians did not like this treachery, and got rid of King James II. They elected in his place Frederick III Aragon, his brother. The French invaded the island, and Frederick had to face them. In 1302, he had to sign a peace treaty in Caltabellotta, stating that on his death Sicily would go back to the French. Frederick died in 1337, but Sicily remained Spanish. Then the island was dominated more and more by very powerful Barons. They were divided between "Catalans" of the Spanish court, and "Latins" or Sicilian noblemen from previous reigns, always quarrelling among themselves and the Monarchy.

After the greatness of the Normans and the splendour of Frederick II, Sicily entered into a dark period. The Aragonese monarchy was truly confirmed by the Pope in 1372, but already showed its weakness in front of the very powerful Barons.

The last independent King was Martin II Aragon, who died in 1410. After his death, Sicily was joined to the Aragonese Kingdom and it was ruled by a long succession of Spanish Viceroys, without political independence. Sicily was only a province of the Spanish Kingdom. But the real masters, were the Barons. By all possible means, they got great estates, on which they imposed heavy taxes. They always opposed the Viceroys, who in turn imposed even more impossible taxes to pay their King. Barons and Viceroys only agreed on one thing: displaying the maximum of pomp. They lived in magnificent villas and palaces; always competing among themselves.  The infuriated population tried to react many times, but never succeeded.  In 1674, for instance, Messina started rioting against the oppressive government. Unable to win the battle alone, it asked  King Louis XIV of France for help, who was at that moment fighting against the Spanish. The Sun King conquered Messina, and for three years Sicily had two Viceroys: a Spanish one in Palermo, and a French one in Messina. Once the French came to an agreement with the Spanish, they were granted some other territories in North Europe. So they abandoned Messina into the hands of the Spanish, who immediately took full revenge on the population. Out of 60,000 inhabitants, many were massacred, many were forced to emigrate and only 11,000 survived in the town.

Spanish domination lasted more than 400 years. It was a period of apparent peace, a long tale of deterioration and stagnation. The economy of the island languished and agriculture impoverished: no civil progress was possible.
In 1700 the last Hapsburg King of Spain, Charles II, died without heirs. Two candidates then applied  for the vacant throne: Charles VI Hapsburg from Austria, as a descendant of the same family, and Philip V Bourbon, nephew of Bourbon Louis XIV of France. A 13-year war went on all over Europe for the succession, and Spain was assigned to Philip of Bourbon by the Utrecht treaty, on the condition that the Bourbons of France and Spain would never unite their crowns.

In the meantime Sicily was assigned to Victor Amedeus II Savoy. The Sicilians were happy again; finally a new King in Palermo! Victor Amedeus was crowned King of Sicily on December 24th, 1713 in  Palermo Cathedral, with much solemnity and pomp. But happiness did not last long. The most important Government posts were once more assigned to the followers of the new king, people from Piedmont and Savoy. Moreover, the king went back to Piedmont the next year, leaving his own Viceroy in Palermo! Sicilians were very disappointed. Heavier taxes than before were imposed on the population.
In the meantime, Bourbons and Hapsburgs were just waiting to regain possession of the island. Philip V Bourbon sent his troops to Palermo from Spain, while the Austrian Hapsburgs conquered Messina against the Spaniards. In 1720, with the new Aja treaty, Sicily was given over to Austrian Emperor Charles VI Hapsburg. Amedeus II of Savoy exchanged Sicily for Sardinia, and Philip V Bourbon was forced to renounce his claim.

From Spanish domination, Sicily passed on to Austrian domination, with a new Viceroy. As usual, more taxes were imposed upon the Sicilians, this time to be paid to the Hapsburg Emperor of Austria. But Philip V Bourbon of Spain never stopped thinking about Italy, Naples and Sicily.

In 1734 he sent his own son Charles, to take Naples and Sicily back from the Austrians, always at the expense of the local people, of course.
In a short time, Naples was re-conquered. Next was Sicily.

In 1735, Charles Bourbon of Spain became King of Naples and Sicily, as Charles VII. So the Austrian domination lasted only 15 years.