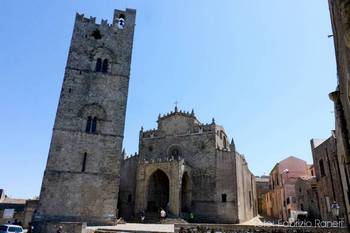 Constance Altavilla, daughter of Roger II, became the only heir of the Norman Kingdom.

In 1186 Constance Altavilla, daughter of Roger IIand the heir of the Norman Kingdom, at the age of forty, married the 20 year old German Emperor Henri VI of Swabia-Hohenstaufen in Milan.
And this was the end of the Norman Kingdom after a little more than a hundred years. Their son was Frederick II, Emperor of the Holy Roman Empire. He had been brought up in Sicily during his whole life and therefore was more a Sicilian than a German. His splendid court in Palermo was the most brilliant in Europe, famous for its luxury and education.

The Castle of Lombardia in Sicily reached its highest prosperity under his rule, it was the life-centre of the Mediterranean. Frederick II inspired a moral unity among the different populations of the island: Arabs, Bizantynes, Latins, Jews. All the sciences flourished under him: medicine, astronomy, mathematics and Latin letters. A Sicilian "school" of poetry was founded in Palermo, and it was the first in Italy to give poetry a common language which later developed into the famous "Stil Novo" of Tuscany.

The whole of European life was ruled from Palermo, and Sicilians never forgot this fact. When Frederick died in 1250, the heir of the Empire was his son Conrad IV. He was in Germany, fighting against the German Barons in open rebellion. So he left the crown of the Italian Kingdom to his brother-in-law Manfred. The Papacy in the meantime claimed the Norman Kingdom as its own property, and the French Pope Clement IV offered the Kingdom to Charles Anjou, brother of French King Louis IX the Saint. Charles of course came quickly to Italy, and killed Manfred at Benevento in 1266.

The last Swabian was his son Corradino, only 15 years old. He was nominated by Sicilians to become their King, but he was killed by Charles Anjou in Naples. In order to punish Sicily, Charles sent down an army under the command of William lâEtendart, one of the most ferocious and cruel men among his officers. Four more years of brutal killings and blood: in 1270 the hated Angevin rule was imposed all over Sicily.

The capital of the Kingdom was then transferred from Palermo to Naples. Very heavy taxation caused hardship to the population, the best lands and public offices were assigned to the French, and a rebellion broke out soon after with the so-called Sicilian Vespers. It all started in Palermo on Easter Monday 1282. A French officer approached a young Sicilian bride and searched her with both hands, claiming she was concealing a weapon. Immediately pandemonium broke out, and any Frenchmen who could not pronounce correctly the word "Cicero", chick-pea, were executed. Probably, connected with this massacre, is the origin of the world "mafia".

The Sicilians chased the French out from everywhere, shouting: "ammazza li Francesi" (Kill the French!).