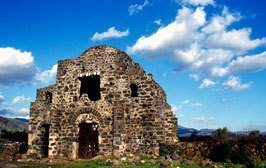 More barbarian raids were to follow, along the Southern coasts,  with the Vandals in 440 and King Genseric, who came from Africa.
The Oriental Emperor sent the Byzantine troops to fight against him, and the Sicilians once more fled to the interior of their island.
In 476, the Roman Western Empire fell. Sicily consequently came under the rule of Odoacer, King of the Eruli, up to the time when it became part of the Gothsâ Kingdom, with Theodoric.

The Emperor was then the Byzantine Justinian.
Twenty more years of war followed between Goths and Byzantines, from 535 to 553. Eventually, the Byzantines made Sicily their base in order to conquer the Italian peninsula. In the meantime, Messina was destroyed by Gothsâ King Totila.
The Byzantine rule lasted in Sicily for almost 300 years. Heavy taxes were imposed on the population who made several ineffective attempts to become independent.

In 663, the capital was transferred from Costantinople to Syracuse, under the domination of the new invaders, the Arabs.