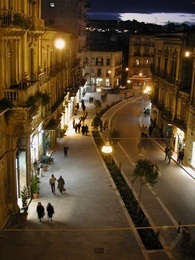 The town was probably founded on the spot of the ancient "Nissa”; the prefix "Kalat” was given by the Arabs in the 9th century AD, hence its modern name. It is located in the centre of the island at the foot of Mount San Giuliano and its population is of 61.000 inhabitants; it is an essentially modern town, once the main Sicilian centre for sulphur, potassium and magnesium extraction. It played an important role in the country’s economy during the last century especially because sulphur became the prime industry and Caltanissetta turned out to be the leading exporter.

Cathedral and its two campaniles, was built between 1550 and 1648. The interior with its three aisles and high dome has some fine decoration. The main nave is adorned with stuccoes and frescoes by the Flemish painter Borremans(1721).
The three major compositions in the vault, framed by Old Testament scenes, represent the Immaculate Conception, the Growing of the Virgin and the triumph of Saint Michel, all of which are still quite remarkable in spite of having needed restaurations.
In the choir you can see a large painting also by Borremans, near the main altar and the richly decorated 1601 organ case of gilded wood with painted panels.

Cathedral of Caltanissetta The church of Saint Sebastian is from the 17th century and is all painted dark red, in markes contrast with the natural stone colour of the other architecture.

The church of Saint Agata, is from the 17th century. In the interior there is an elaborate inlayed polychrome marble decoration and a beautiful marble altar-piece by Ignazio Marabitti.

TheCivicMuseum houses artefacts recovered from around the town. Some of them belong to the Pre-hellenistic period ( 7th - 6th century BC); as for example two bronze statuettes with their arms outstretched or some helmets; many others testify to the flourishing Greek period such as beautiful Attic ware, for example a "crater” bearing a painting of the god Ephaestus, seated in his forge, hammering out hot iron (6th century BC).
On the outskirts you can visit the Abbey of "Santo Spirito”, founded by Roger I (11th century) and consacrated in 1153, is Romanesque in style.
It has three typically Norman apses ornamented by decorative blind arcading. Inside, it has a wonderful 15th century Crucifix and a deep early Romanesque baptismal font for the total immersion of infants, decorated with stylized palmettes.