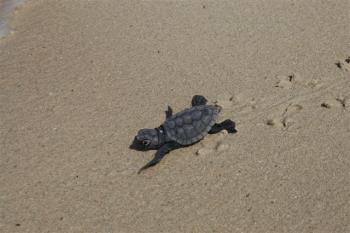 Lampedusa, rabbits and turtles
Lampedusa is an island off the Sicilian coast of Agrigento, and is closer to Africa than Europe. For many years the television news has reported on the landings of illegal immigrants, mostly Africans from poorer areas, who land in Italy after a very long and dangerous journey.
The people of Lampedusa have always received the refugees with great solidarity. Lampedusa is also a tourist island that attracts thousands of visitors because of its stunning beauty and turquoise sea. In Lampedusa you can visit the island of rabbits, considered to be one of the five most beautiful beaches in the world, with its fine white sand and an incredible turquoise sea. Every year in late summer hundreds of people gather to witness a magical event, the hatching of the eggs of a rare and endangered species of sea turtle called Caretta Caretta, which returns to the island to breed.