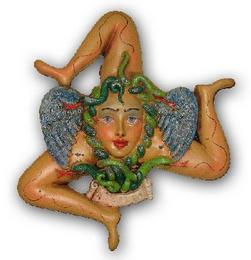 Have you ever noticed on the Sicilian flag the symbol of the female head with three legs?
It is a Gorgon, one of the ogres that were part of Greek mythology.
In olden times Sicily was called âTrinacriaâ, a triangular-shaped island.
The head of the ogre was decorated with spikes, the symbol of a fertile land.

On the Sicilian flag we also find the institutional colours of the region â yellow and red â reminding us of the courage of the cities of Palermo and Corleone, which were the first to rise up against the foreign conquerors in the time of the Sicilian Vespers in 1282.
In every public office in Sicily you will find, together with the Italian and European flags, this symbol of the identity and pride of Sicily.