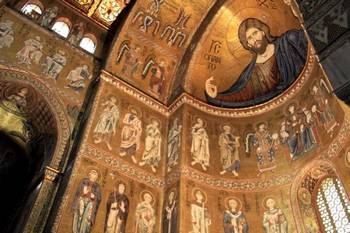 At Easter in the year 1282,  one of the most famous events in the history of the island occurred, the great uprising known as the Sicilian Vespers. Long after the Greek and Roman period, this dramatic incident happened in which the fate of Sicilian and Greek speaking remnants of the Roman Empire were intertwined.

At that time Sicily was ruled, along with Provence and much of Italy, by Charles of Anjou; brother of the King of France. The Papacy had given him the title of King of Sicily, and encouraged him to conquer the kingdom to displace the Hohenstaufen dynasty. Sicilians hated his rule because it was oppressive and neglectful, but chiefly because it was run by foreigners â mainly the French.

Charles was powerful and ambitious. He planned to attack what was left of the Roman Empire, centred in Constantinople. The Fourth Crusade had captured Constantinople in 1204, and established what was known as the Latin Empire. This lasted until 1261 when the Greeks recaptured the city by surprise. Restoring âLatinâ  French Catholic rule provided a justification for Charles to mount an attack.

Emperor Michael VIII Paleologus had tried to avoid this, without success, by striving to make the Orthodox church submit to Rome. Michael knew that he had little chance of defeating the assault which Charles and his allies were ready to launch. He needed a miracle; Byzantine diplomacy and money provided it.

Queen Constance, wife of King Peter of Aragon, had inherited the Hohenstaufen claim. Encouraged by a group of exiles having Sicilian connections, and access to Byzantine gold, associated with a well Known doctor John of Procida, he organised a fleet and army to enforce this claim by attacking Charlesâ territory once the latter had moved against Constantinople. His excuse was that he intended to attack Tunis. The Pope did not believe him. On Easter Monday, 30th March, as Charles completed last minute arrangements to set sail from southern Italy against the Roman Empire, people gathered for evening service at a small church near Palermo. A riot broke out caused by the over familiar treatment of some of the local women by a group of drunken French officials.

The locals killed all the French. As the church bells rang for the Vespers, the riot spread through the city, to the cry of âDeath to the French!â, about 2,000 French men and women, and those with French connections, were slaughtered overnight. The disturbances spread rapidly and by the end of April the Angevin fleet in the harbour was destroyed by fire, and  a messenger was sent to inform the Emperor Michael.

The rebels appealed to the Pope for protection, but he was completely on the side of Charles of Anjou. Messina withstood several attempts by Charles to recapture it, but the resources of the rebels were running low, so they appealed to Peter of Aragon and offered him the crown. At the end of August his forces landed at Trapani and marched across the island to the relief of Meddina. Charles retreated to the mainland. The Pope, Martin IV, declared a Crusade against Peter of Aragon and the Sicilians, in which the King of France led an unsuccessful invasion of Aragon. After considerable fighting and haggling Peter retained the crown.

At an early stage, in a bizarrely chivalrous episode, Charles and Peter agreed to settle their differences by personal combat, each king to be supported by one hundred champion knights. This was an embarrassment to the Pope and the kings of France and England. In June 1283 they travelled to Bordeaux, (then held by King Edward I of England). On the appointed day each party went to the designated place â but several hours apart. Each proclaimed victory and departed.

When Charles realised the seriousness of the situation caused by the rebellion, he is said to have prayed, âLord God, since it has pleased you to ruin my fortune, let me only go down by small stepsâ. His wish was granted. He never recovered Sicily, and by the time he died in January 1285, his plan to capture Constantinople had been completely destroyed.

When the Emperor Michael heard the news of the rebellion, he noted in his memoirs, âShould I dare to claim that I was Godâs instrument in bringing freedom to the Sicilians, I should only be stating the truthâ. Stevan Runciman, in The Sicilian Vespers, concluded that both Michaelâs agents and gold had indeed played their part in planning the uprising; and the uprising had not only freed Sicily; it had saved his Empire. Charlesâs great expedition against Constantinople had now to be postponed forever.

The Sicilian Vespers became a by-word for conspiracy and the destruction of a rulerâs ambitious plans by unexpected events. Some three centuries later, when Henry IV of France boasted to the Spanish ambassador of the damage he could do to Spanish interests in Italy, he said that â I will breakfast at Milan, and I will dine in Rome.â Then, replied the ambassador, âYour Majesty will doubtless be in Sicily in time for the Vespersâ.