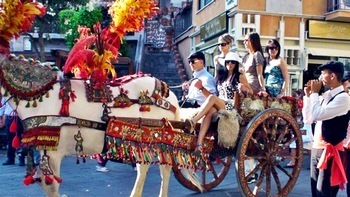 For centuries up until the end of the second world war the Sicilian cart has been the main means of transport for the inhabitants of this Island. Especially after the opening of the large inner streets in 1800, the cart drivers travelled the same route taking onboard along the way, goods such as oil or wine, and sometimes people, agreeing on the price at the same time.
The sides of the carts were often painted with religious scenes or pictures of Orlando the Furious of Ariosto fighting the Muslims or Christians.
The cart was drawn by a horse wearing a strange hat with a red and yellow-coloured feather, it wasnât by accident that these colours are the symbol of Sicily.

Nowadays some of these carts are still used in folkloristic events depicting the history of Sicily. It is possible to visit some exhibitions and museums about these carts in Terrasini, in the province of Palermo and in Enna.