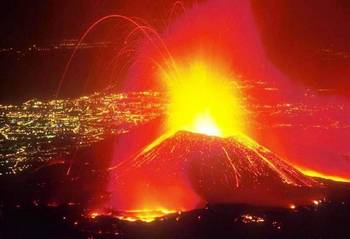 At 10,902 feet above sea level, Mount Etna is the highest active volcano in Europe.
Its base is 93 miles in circumference, and the area covered by lava is about 600 square miles. Minor eruptions have been frequent.

The worst eruption in modern times occurred in 1669, when the town of Catania was completely covered with lava.
The nearest tourist town is the holiday resort of Taormina, about 10 miles away. The volcano can be seen at a distance of a hundred miles, but its peak is often shrouded in clouds. The name is derived from the Greek for âI burnâ.

There are four major myths associated with Mount Etna.
In the first, Zeus subdued the monster Typhon, after a long fight, by hurling Mount Etna on top of him. In a variant of this myth, Gaia produced another monster called Enceladus to avenge Typhon, and either Zeus bound him under Etna, or Athena threw the whole island of Sicily on top of him.

The second myth is that Etna is the smithy of the gods, where Hephaistos or Vulcan forged weapons for the gods, assisted by the Cyclopes. This is where Odysseus is said to have met Polyphemus, and Aeneas passed by.

The third myth is that the Cattle of the Sun grazed on the slopes of Mount Etna. Killing and eating some of these brought destruction upon Odisseusâs men. It is said that the town of Taormina is associated with this myth, since the name may come from âtaurosâ â bull and nearby is a valley suitable for grazing, called the Valley of the Ox.

The fourth myth is that Persephone liked to gather flowers on the lower slopes of Etna and to dance with the nymphs on the plain of Enna.
When Hades abducted her, he opened a crevice in Mount Etna as an entrance to the Underworld.