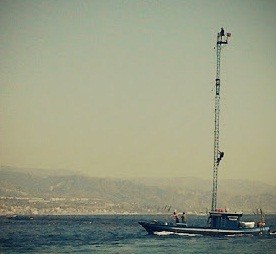 The Straits of Messina separate Sicily from Calabria: although just 3 km wide, this is where, amidst the strong currents, enormous swordfish, usually in couples, pass by.
In Messina there has been a tradition for more than 2 thousand years in which the fishermen dedicate the months from May to August to catching swordfish.
Nowadays there only remain about ten specialized crews, who use a special type of boat equipped with 5 oars, which is called a âFelucaâ and is 6 metres long. Every boat is provided with a mainmast tree trunk 25 metres high, up which a man climbs to look out for the swordfish.
The âFelucaâ also contains a long gangplank where the fisherman sits, saying a prayer to the virgin saint and, following the directions of the look-out man, hurls a harpoon with a long fishing line to catch the fish. After a tiring struggle, the fishermen pull the fish on board and thank God and the Saints for having helped them in their battle against this giant of the sea.