Sicilian gastronomy and its ancient traditions.

Sicilian gastronomy and its ancient traditions. 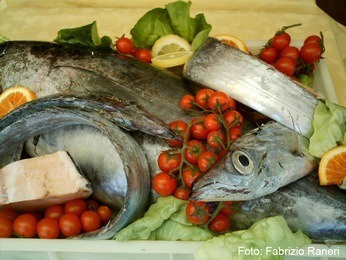 Sicilian gastronomy has ancient traditions, since its history, and that of the people who have inhabited it, is one of the most ancient in the world. Its first inhabitants, migrants and invaders, were probably attracted by its exceptional climate and extraordinary fertility.

The Greeks, when they first settled on the island, in the VIII sec. A.C. found three different types of people, the Sicilians in the east, the Sicani in the west and the  Elimi in the north-western region. The Greek historian Tucidide, author of a history of Sicily that dates back to 425 A.C., gives us the most accurate ancient facts on Sicily. The historical period of Sicily started, therefore, with the Greek colonization (VIII sec. a.C.) in the IV sec. A.C. We already have one of the most meaningful testimonies on the habits and customs of the Sicilians from this great Platone philosopher who, in his writing, criticised the Siracusani for their gastronomic habits: they ate too many times in a day! and according to the testimony of this Greek philosopher, such habits were not considered good manners and needed to be refined.
Signs that Sicily even in those early days boasted of numerous traditions were more than confirmed. That should not surprise us:  Sicily throughout the ages was one of the most fertile islands, because of its geological characteristics and its climate.

If we add to that the abundance of game and fish, we are in a position to comprehend how very rich the Sicilian kitchen could be even then. The Arabs produced a real revolution in the gastromic habits of the Sicilians, for example pack-saddles for transporting food and to introduce many unknown drinks to the Sicilians. Above all, the Arabs increased agricultural production: today we are accustomed to associating Sicily as a Goddess of the earth,with oranges and lemons, and the "Conca d'oro" and "Piana di Catania" with the beauty of their green mantle of citrus groves. But it was the Arabs, as we have seen, who first  introduced these products  to Sicily and because of them, the island still yields exquisite fruit, like the delicate peach or apricot, vegetables like asparagus; other crops like rice and sugar cane, cotton, the carob tree, the pistachio nut and aubergines are all thanks to the Arabic civilization. Also the  legendary and perfumed jasmine plants from which their essence is taken, even today,  to form the beautiful perfumes of the area, and the most famous "scursunera, were  also imported by the Arabs. Moreover it seems that the inventors of the "sorbetto" were also the Arabs, from which the name is also derived: "scharbat", of "cubbaìta of giugiulena"  and "sapete" a cake, made from honey, almonds and sesame seeds, which is still to be found in the stalls of the popular quarters or at the festivities of patron saints.

The specialties that follow are only some examples which can be traced back to the Arabic tradition.
We must specify that when we nominate a plate as "of Arabic derivation" we do not mean that it has been invented by the Arabs. This may be the case in some instances, but most of the plates known nowadays are elaborations made from the products introduced by the Arabs which means that these may contain elements that are typical of the Arabic kitchen, but are made using different techniques and methods by Sicilians to produce original Sicilian dishes.

The kitchen of Acireale is typical of the Sicilian food tradition specialising in exquisite cakes.

There are the second plates such as the grilled mixed fish flavored with oil, lemon, parsley, garlic and pepper or aromatic herbs; "masculine", a typical fish cooked in a thousand different ways;  fried, raw in salads, barbecued etc. As far as meat lovers are concerned  there is the "falsomagro", a typical plate with bacon fat, eggs , cheese, onion, cooked pepper and all cooked in a tomato sauce. While others prefer the shell-fish: clams, mussels, ox eyes, typical of the restaurants on the coast, whose terraces are full of tourists in the summer evenings.

Among the products of Sicily, "scacciata", a typical flat cake  used a lot in the christmas festivities; "Arancine di riso"; "Pizze alla siciliana", fried and stuffed with cheese and anchovies.
Finally, the sweet shop, rich and fanciful.
The delicious cakes made from almonds, to the  "granita di torrone", "pasta reale", made by moulding the paste into different coloured shapes: fruits, fish, puppets, etc.  A product very popular in Acireale is the famous  "cannoli" and the sicilian cassata, which use the skills of the pastry cooks of long tradition, who enrich them with cream,  chocolate pieces, pistachio  and hazel-nuts and  which are all very difficult to resist.

After a day dedicated entirely to relaxation, there are many plates to entice your appetite, from freshly caught fish, made into a pasta dish or, a grilled or marinated second  course. In contrast with the sea menu there are the vegetarian dishes. Aubergines,  prepared in thousand of  different ways, the most common being fried, stuffed, sweet or sour with vinegar or the "caponata" (mixed cooked sicilian vegetables ) eaten all year round. We would advise you not to over indulge with this huge variety of Sicilian fare, we wouldn't like you to spoil your holiday.  To accompany the food we would suggest a fine "Anthilia" white wine, with its intense fragrance,  beautiful and complex, with a hint of fruit. Also do not forget the inimitable taste of the Sicilian cheese, the "Pecorino", cheese which contains a mixture of aromas and can leave a bitter taste, but grated on pasta dishes it creates a particular fresh taste thanks to the pistachio nut. It can also  be eaten on its own or cut into slices to be dipped into the famous Corvo wine.

A perfect conclusion to a typical Sicilian lunch is the sicilian "cassata", made up of candied fruit and ricotta cheese all washed down with a fine glass of sweet liqueur, you can choose between the Marsala, Zibibbo and Passito or   try a refreshing milk drink made from almonds "latte di mandorla" or a cooling granita (crushed ice) in many flavours, we would advise you to try the pistachio or the almond flavour, or the many other alternatives.
And for an unforgettable evening, "le mille ed una notte", a beautiful wine, a typical speciality of Sicily.