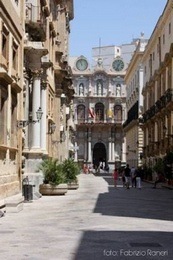 A very busy provincial town on the northwest coast of the island, facing the Egadi islands.
Heavy port traffic especially due to a flourishing industry and trade.

Founded by a very archaic population called Sicans, the town was for a longtime a Carthaginian colony.
After the battle of the “Egadi islands” between Romans and Carthaginians, the town became a Roman possession.
It was a leading trding centre under the Arabs and Normans. Its importance grew under the Spanish Aragonese and it became the formost centre in Western Sicily.

In the 16th century Charles V granted it many privileges and had the city walls strengthened (almost completely demolished in 1860).
The sickle-shaped city (in Greek language: Drepane) consist of an old town, stretching along a little low peninsula.

The most famous monument in town is the Shrine of the “Annunziata”. It was erected by Carmelitan monks in the 14th century.
Giovanni Biagio Amico reconstructed it in 1760. On the original building the gothic façade, rose window and a doorway still remain. The single naved interior is sumptuously decorated in Baroque style. The greatest interest though is due to the Virgin’s Chapel behind the high altar. This chapel with fine marble decoration, houses under a precious canopy, a venerated marble statue of the Madonna and Child, the work of one of the most famous Tuscanian sculptors.
Nino Pisano born in Pisa (14th century). Close to the Shrine there is the beautiful Pepoli National Museum housed in the former Carmelitan Monastery. The two ground floor rooms display sculpures and stone pieces from various periods, including the notable St. James by Antonello Gagini, one of the most important sculptors from the Sicilian Renaissance. On the first floor interesting collections of paintings from the Tuscanian and Neapolitan school including the refined Pietà by Roberto d’Oderisio and St Francis receiving the stigmata by Titian. Other rooms display very fine collections of altar frontals, religious objects, majolicas, precious coral jewels.

Other interesting monuments are the Baroque Cathedral of Saint Lawrence, the Purgatory Church and the Jewish Quarter with the so called “Giudecca Palace” once the former Synagogue of the town.