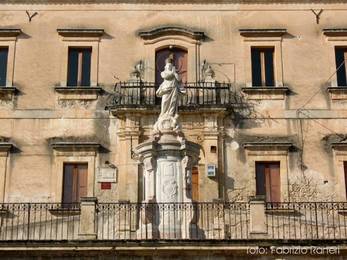 It is the higher section of the town. It was rebuilt after the 17th century earthquake, according to a grid plan at right angles to the main streets.
The elegant “Via Roma”, bisects the town on a parallel axis to the side of the hill; the perpendicular “Corso Italia”, meanwhile, runs down toward Ibla between wonderful buildings. The main square, built on two levels, is occupied by the Baroque façade of the Cathedral of Saint John.
It dates from the early 18th century. Its huge front elevation is flanked by its campanile. The interior consists of three vast aisles separated by monolithic columns with capitals. The decoration includes fine stuccoes and 19th – century paintings. Along “Corso Italia”, stands the Palace Lupis”. It is decorated with nice balconies and brackets.

Palazzo Zacco is another renowed private dwelling in the town.

Note the beautiful coat-of arms of the ancient family and the amazing balconies brackets, projecting from the lateral façade, carved with figures and grotesques.

Palazzo Bertini was built at the end of the 18th century.
Three large masks peer down from the carved window keystones, as if watching the pedestrian traffic.
According to tradition, these personify a beggar-ugly, angry and toothless; a nobleman–decisive, serene in the assurance of his social rank, and a merchant–wearing a turban and a self-satisfied expression assured by the weight of the money in his pocket.