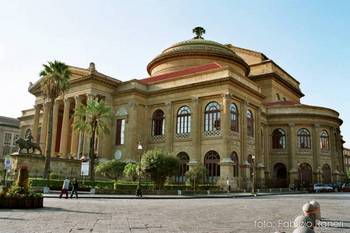 Capital of Sicily, it is situated on the Thyrrenian Sea, north west of Sicily. The town stretches in a large plain the “Conca d’ Oro”, surrounded by several mountains. It was founded in the 8th century BC by the Phoenicians, then it was conquered by the Greeks, Romans, Byzantines, Arabs, Normans, Angevins, Spanish and it became part of the united kingdom of Italy under the Savoy House only in 1860 The present name derives from the Greek words Pan Ormos, which stands for “all Harbour”.

The most splendid periods of its history are under the Arabs and Normans, when the town turned out to be one of the most vigorous and flourishing of Europe. Most of the “Highlights” of Palermo date from these periods ( from the 9th to the 12th century). Unfortunately the city suffered very heavy bombings during World War II and still today shows many “ruined” buildings from this period, (1943). The city is the seat of the Sicilian Parliament and Governement.

Quattro Canti is the main intersection in the old town. The square was opened under the Viceroy of Vigliena in the 17th century and it is adorned with marble statues of the four seasons, Kings of Spain and patron Saints of Palermo. A few steps along the main Spanish street of Palermo, Via Maqueda there is the splendid Pretoria Fountain designed by the Florentine Fr. Camilliani in 1554 and decorated with various statues of mythological characters and allegorical figures.
In front of the fountain stands the Town-hall, originally from the 1300s at the back, the marvellous church of “Martorana” and San Cataldo. The first, also called Saint Mary of the Admiral, was built in 1143 by George of Antioch and is one of the most beautiful examples of Arab- Norman architecture. In the interior it is covered of Byzantine gilded mosaics representing some scenes from the Virgin Mary’s life. In the central dome the representation of the “Almighty God” surrounded by the four Archangels.
The neighbouring Church of San Cataldo, is topped with three little red cupolas in a pure Arabic style. It was built in 1160 by the Norman Chancellor Maione da Bari. Along the other main street in the historic centre of Palermo, “Corso Vittorio Emanuele II”, you can see the wonderful Cathedral, from the Norman period, built in 1182 by the Archibishop Walter of the Mill and dedicated to Our Lady of the Assumption.
In the outside of the building you can see many different styles; nevertheless it is a striking edifice with its golden stone called “tufa”. The present Cathedral stands on the site of an older basilica and a mosque. The interior could be rather disappointing, for it underwent several transformations and refurbishing in Neo-Classical style during the 19th century.

The most important chapel is the Paron Saint’s, Rosalia whose relics are kept in a silver coffer carried every year in the month of July in a very impressive procession along the streets of the old city.
On the large “piazza Indipendenza” stands the most important and ancient palace of the town the “Palace of the Normans“, built by the Phoenicians on top of the hill and completely rebuilt by the Arabs in the 9th century AD. The Palace houses the famous Royal Apartments, especially from the Norman and Bourbon period, but the most precious monument inside, the Palatine Chapel is one of the highlights of Palermo. Built in 1131 by Roger II is a jewel covered of Byzantine mosaics depicting scenes from the Old and New Testament and Saint Peter’s and Paul’s lives.

San Giovanni degli Eremiti Church is another very fine Arab-Norman monument from 1132 AD, built by the king Roger II. The nave is surmounted by two red domes and the apses zone by three. It was built over a former structure, perhaps a mosque. The Church is surrounded by a charming garden with lush vegetation and in a corner stands the little Cloister with twin columns and Moorish arches.
La Zisa is one of a group of peasure-palaces built by the Norman kings in their private park on the outskirts of Palermo. This massive building with its flanking towers was begun by William I (c.1160) and finished by his son William II. It houses the "Muslim Art Museum".

The main Fountain Hall on the ground floor, is decorated with a beautiful friese of mosaics inspired from the Persian School and stalactite vaults in three recesses along the sides.

The Catacombs of Cappuccini, you can see the biggest monumental Cemetery in the world as far as mummified bodies are concerned. In fact throughout three centuries the Capuchin monks of Palermo were allowed to embalm wealthy people belonging to several categories: citizens, priests, friars, children…About 8000 bodies can be still seen in the underground corridors, almost all dressed up.

The Archeological Museum displays very fine collections of Greek, Phoenician and Roman, artefacts from the west of Sicily, but also nice Etruscan and Egyptian collections. One of the most famous room is the “Metopes of Selinunte” room, with the best Greek Sculptures coming from the friezes of several temples situated in this very flourishing Greek town from the antiquity.
The so called “Ram of Castello Maniace” is another highlight of the museum. It is an incredibly beautiful bronze ram from the 3rd century BC. The Regional Medieval Gallery of Palazzo Abatellis, is the other important museum to be visited. It is housed in a splendid building from the 15th century, in Gothic- Catalan style.
You can see the best examples of Sicilian sculpture from the Renaissance and a very nice collection of canvas, paintings from various schools, Umbrian, Tuscanian, Catalan and Flemish, all from the 13th to the 17th century. The two most beautiful works are the “Bust of Eleonora of Aragon”, an incredible feminine marble bust by Francis Laurana and the “Annunciation”by Antonello da Messina, a charming painting of the Virgin, of true Sicilian type.