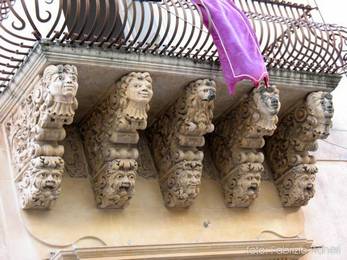 The largest centre in the province of Syracuse, is relatively a recent town. It was destroyed by an earthquake in 1693 when ancient Neai or netum was reduces to aheap of ruins.
The inhabitants decided to rebuild their city on a hillside facing the sea. Not only was their choice of the site a good one, but G. Battista Landolina, a patrician and great patron of the arts, called upon the architect Rosario Gagliardi to design the new town. A Noto man, himself, Gagliardi devoted all his talent to rebuild his native town, with the result that it is one of the most beautiful.

Baroque towns in the world and recently recognized a UNESCO spot.
Landolina designed the town plan around three main parallel axes which run horizontally east- west across the hillside. Three squares were introduced to break the monotony of the urban lay-out and on each of them a church was placed as a backdrop. Three different social categories were catered for: the highest part was reserved for the nobility, the centre for the clergy, while the ordinary people were left to fill the rest of the town.
To reinforce the architectural unity of the town only one type of material was used: a beautifully soft yellow limestone.
The final effect is of a great monumentality.

Many Sicilian artists were involved in the reconstruction of Noto, under the supervision of the Duke of Camastra, the acting representative of the Spanish viceroy: these included Paolo Labisi, Vincenzo Sinatra and Rosario Gagliardi, who being a closer follower of Frances Borromini. Although Noto was entirely rebuilt by local craftmen, it fits into a much larger picture as Italian hands modelled, fashioned and released expressions of the Baroque movement all over Europe and beyond, the new Russian capital, San Petersburg.

Porta Nazionale is a powerful triumphal arch with stands at the beginning of the main street, Corso Vittorio Emanuele. It was built in 1838 for the first visit of the king Ferdinand II, who so loved Noto that he returned to the town twice. Along the “Corso” you will see the Church of Saint Francis, built by Vincenzo Sinatra, a local architect. It rises above a theatrical staircase divided into three sections. Across from the church is the Monastery of “San Salvatore”, an impressively austere building flanked by a massive keep and adorned with windows protected by finely worked wrought-iron bars. A little farther you will see “Palazzo Ducezio”, another building of Sinatra, inaugurated in 1746.
The original design was comprised of only a ground floor with 11 arches upheld by pilasters and half columns. The three central arches curve out from the rest of the building and are reached by a semicircular flight of steps.
The palace was converted into the town hall, and a first floor was added in 1951, somewhat spoiling the balance of the whole. Dominating the next piazza is the Cathedral of San Conrad, with its impressive façade.

The Cathedral was completed in 1776. The genius of the architects is reflected in the theatrical appearance of the building and the immense tripartite outside staircase. The long façade is a masterpiece of proportion. Above you can see four statues of the Evangelists crowning the vertical sweep begun by the four columns which frame the side portals. The dome was built in 1872 to replace the original, which was damaged in a minor earthquake. It collapsed once again in 1993 and it is still under reconstruction. Next church on the left of the main street is Saint Charles, with its beautiful convex facade in three different style. It was designed by Rosario Gagliardi between 1736 and 1746.

At the end of the main street opens the “Piazza XVI maggio” planted with fine trees, beneath which is a statue of Hercules, from the ruins of the ancient Noto; Hercules is triumphantly holding up the town’s coat-of arms. In the background the walls of a Domenican Convent frame the sumptuous façade of “San Domenico” Church, designed by R. Gagliardi between 1703 and 1727. The influences of Roman architecture and Spanish Baroque are integrated here with those of the Sicilian school. It is more a rococò palace rather than a Church.
On Via Nicolaci, a side street connecting Via Vitt. Emanuele to Via Cavour, you can admire one of the most spectacular baroque facades of Noto, Palazzo Villadorata. It was designed by Gagliardi in about 1731.
The rectangular facade is noteworthy, firstly for its wide doorway which opens into a slot courtyard designed for carriages and secondly for its two rows of impressive windows.
Those on top are adorned with “pot-bellied” balconies of wrought-iron shaped like “the breast of a goose” that bulge out over an unusual assortment of supporting sculptures. They include monsters, griffons, centaurs, cherubs and old men.