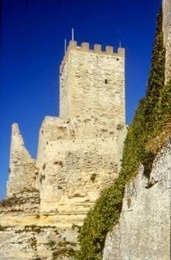 Enna, from the Etruscan "mount".
Or "Ennaien", word of Greek derivation that means "living within".
Or "Ennaon", too, "the temple".
Or perhaps "En-naan", Punic expression indicating a "place of delights", a "source of amenities", an image which isn’t only poetical, but also true, motivated by the period of the big transhumances, when the herds moved with the shepherds from the plains to the pastures on the mountains. Last but not least, we could take into account the name of Ennio, the Syracusan who repopulated the city after it was razed to the ground by the Siculians, in the V century B.C.

Various were the names that Enna received from the many populations that inhabited it, although conquering the city wasn’t easy at all. Thanks to its position in the middle of Sicily, Callimaco defined it "Umbilicus Siciliae", while Tito Livio gave the city the name of "Urbs inexpugnabilis", due to its strategic position inland.
The first settlements were created by the Sicani, a native Sicilian population who was then forced to abandon the eastern side of the island because of the invasion of the Siculians.

The siculians made Enna one of the main sacred centres for the cult of Ceres, the ctonian Harvest Goddess, who in honour they built a sacred fence and a sanctuary on the eastern slope of the mount. Traces, mostly imaginable, are in the Ceres Rock, at the foot of the Lombard Castle.