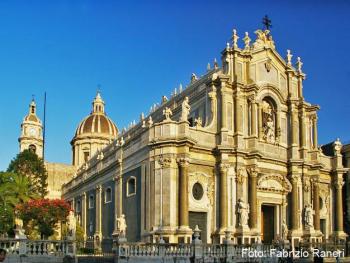 Catania is Sicily’s second largest town, with a population of 400.000 people.
Known as the Milan of the South, Catania is the financial and economical centre of the island.
It was founded in 729BC by the Greeks, at the foot of the famous volcano Mount Etna. The fate of the city has always been linked to the presence of it. As a matter of fact, the history of Catania is marked by a long succession of disasters, most of them depending on the volcanic activity and eruptions of Mount Etna.

The earliest known destruction of Catania was in 476BC, when Hieron of Syracuse exiled its inhabitants. They returned 15 years later, but when their new reconstructed town began to thrive again, another jealous tyrant, Dyonisus sacked it furiously in 403 BC. In AD 121, Etna erupted and levelled the city.

On February 4th 1169, a terrible earthquake killed about 15.000 people. Catania rose from its ashes again only to be beaten down by the pyrate Barbarossa’s son.

The Angevins ransacked Catania during the rebellion of the "Sicilian Vespers", 1282,and after that the town was ravaged by the plague, one in 1423 and the other in 1576. On march 11th 1669, when Etna erupted once more, the earth split open over an area of about 9.3 mi the Nicolosi district, where the "Rossi Mountains" stand today and a river of lava flowed into the city, covering the port and spreading into the sea for about 1.2 mi. The eruption continued until May of that year; because of the extent of the catastrophe, Charles II of Spain exempted the town from paying taxes for ten years.
On January 11th 1693, while 12.000 people were attending a service I the Duomo, another earthquake demolished the town, killing two thirds of the population. There was another damaging tremour in 1818 and in 1928, a nearby village was buried under lava. The most recent eruptions were in 1971,1983, 1990, 1992 and 2002.

The main monuments are: the Cathedral, the Badia of Saint Agatha, the Church of Collegiata, Palazzo Biscari, the Roman Theatre, the Roman Anphitheatre, the Ursino Castle, via Crociferi, Villa Bellini, "la Pescheria"

The Cathedral was built by the Norman Count Roger I in the 11th century and stands on one of the most beautiful squares of the city. It was rebuilt several times. After the earthquake in 1693 Vaccarini, undertook the construction work, which lasted 6 years.The only parts of the Norman church which survived after this disaster are the foundations and the apses at the back. The present façade is one of Vaccarini’s masterpieces: the Baroque decoration is enhanced by free-standing columns and the statue of Saint Agatha in the last niche on top.
Inside the Cathedral is rather naked, except the beautiful Baroque canvas put in the side chapels along the aisles. By the second pilaster on the right, is the tomb of Vincenzo Bellini, the most famous Sicilian composer, who died in Puteaux, near Paris in 1835.The last chapel to the right contains the sarcophagus of Costanza, wife of Frederick III of Aragon, who died in 1363. The southern chapel is dedicated to Saint Agatha: this although Renaissance in spirit, is encrusted with gilded stucco decoration. In the sacristy, there is a large painting of the volcanic eruption that occurred in 1669.

In front of the Cathedral, on the "Duomo" square, stands the symbol of Catania, the "Liotru", the Elephant statue, sculpted by G.Battista Vaccarini in 1736. An elephant carved out of lava, trunk readied, stands on a stone pedestal and seems to watch to the town.The animal carries on his shoulders an ancient Egyptian obelisk with hieroglyphics dedicated to the goddess Isis.
On the right of the square is the "Palazzo Senatorio" or of the "elephants",now the town hall, built by Vaccarini in the 18th C.
In the courtyards stand two Senatory carriages from th 18th C. The windows outside are topped with bas-reliefs of small elephants.
Catania, Palazzo Biscari On the southern corner of the square is the statue of the Amenano, a fine Baroque allegory of the ancient Amenano river.

The Badia of Saint Agatha is another beautiful example of rich Baroque architecture built by Vaccarini.
The façade shows an interesting elevation with, in the middle, a wrought-iron balcony where in the past the Dominican nuns used to show up and look out at the daily life.

The Collegiata Church is the first church on the main street, Via Etnea. It has an unusual concave façade by Stefano Ittar.
Inside can be seen frescoes by Giuseppe Sciuti.
The church belonged to the Jesuit order.

Biscari by Antonio Amato, is one of the most important and ornamented Baroque palaces of Catania.
It was built in the 17th century, next to the harbour.
Absolutely amazing are the marble decorations that cover the façade and the cornices around the windows: cupids, flowers and stylized animals enhance the beauty of the natural black and white stone of the building.

The Roman Theatre was built over the ruins of the former Greek one from the 5th century BC, in the 1st century BC.The diameter of the theatre is 97 m, that of the orchestra is 29m. The rows of seats could hold 7000 spectators and were divided into 9 sections cut by two circular corridors. This is the theatre were Alcibiades is believed to have harangued the inhabitants of Catania to side with Athens (415 BC).
The Odeon is beside the Theatre and belongs to the same period. It was used for philosophic speeches and music performances; it was part of an ancient acropolis and could hold 1300 spectators.
The Roman Anphitheatre measured no less than 125m, 105 in diameter and its arena was 71m by 51m.
It might have accommodate 15000 spectators. Most of the amphitheatre lies hidden below the piazza and the surrounding Baroque buildings.

The Ursino Castle was built by Frederick II of Swabia. This austere building was built on the sea-front in the 13th century; the reason why today it stands at a certain distance from the sea, is that in 1669 a great river of lava flowed down, pushing the water off shore.Tha castle is named after a Roman consul "Arsinius"or possibly after the roman Orsini family.
Its plan is square; it has four round towers at each corner and two half towers along the main facades.
It houses today a fine collection of paintings, principally by southern Italian artists, that arrange from the 15th century to the 19th century. Notable works include a polyptych with the Virgin enthroned with Saint Anthony and Saint Francis by Antonello Saliba (15th C), a pupil of Antonello da Messina.
You can also see "Saint Christopher" by Pietro Novelli.

Via Crociferi is an example of 18th century religious urban architecture, and it offers a succinct view of the development of the Baroque style in the city.During the 18th C, poverty was widespread, and there was no social welfare, so religious groups played an essential role in society by aiding and educating the destitute.
Convent churches were built on the street, often showing their wealth with elaborate facades. Along Via Crociferi you can admire "SanGiuliano" Church, built by Vaccarini in 1738; the "Gesuiti" Church, built by Father Angelo da Licata, with its beautiful twin columns on the façade; "San Benedetto" Church, built by Alonso di Benedetto and the doorway by Vaccarini; "San Francesco" Church, with its impressive façade, is by Angelo Italia.

Villa Bellini is a peaceful public garden designed by the end of the 19th C.
It opens on "Via Etnea" and has been dedicated to the most famous Sicilian music composer.
From the top of the gardens, next to the "art Nouveau" kiosk, you can enjoy a beautiful view over the city and Mount Etna.

The "Pescheria" is one of the most picturesque corners of Catania. It is a very interesting and lively open-market, where every morning hundreds of fishmongers and fruit and vegetables sellers shout to any possible buyers.