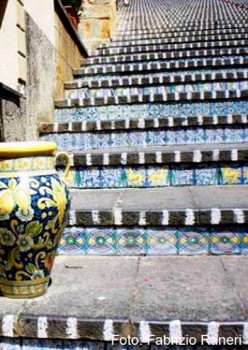 Caltagirone takes its name from an Arabic expression (qal’at-al-ganom) meaning castle of the genies (spirits believed to dwell in the surrounding caves).

The necropolises in the country areas of Montagna and degli Angeli, dating from the 2nd millennium BC, together with numerous findings from the Neolithic and the Early Bronze Age, are evidence that the territory was inhabited in prehistoric times.

A Sicel settlement has been identified on Monte San Mauro, SW of the modern town.
The Arabs built a castle here which was attacked in 1030 by a group of Ligurians led by the Byzantine general George Maniakes. The local dialect still has some Ligurian traces.

The town flourished under the Normans and the Swabians and became a centre for the production of ceramics.
The earthquake in 1693 necessitated a reconstruction that was the work of a number of skilful baroque architects, including Gagliardi, Marvuglia and Bonajuto.