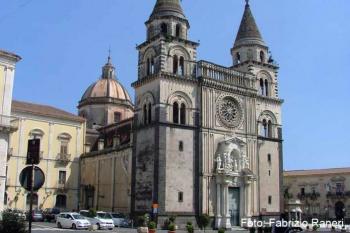 The name Aci derives from the Greek term Akus, that means penetrating and refers to the coldness of the homonymous river, subsequently covered by the lava flow. During the Roman period, the suburb was called Aquilia.

Destroyed by 1169's earthquake, it was rebuilt and attributed the name of Aquilia Nuova.

In 1326, because of an incursion by will of King Roberto of Napoli, and the subsequent disastrous fire, the inhabitants found shelter on a nearby hill, where they founded the current inhabited center.
In 1642, the town was baptized as the "Citta' Regia" (royal city) by King Filippo IV, thus the derivation of today's name Acireale.

The town was destroyed once again by 1693's earthquake, and nevertheless blossomed shortly after, and became bigger as numerous monuments and cultural centers were constructed.
The most architecturally interesting monuments include the Roman-Gothic Duomo, of the XIV century, that preserves the Chapel of S. Venera and a silver statue of the Saint, the Basilica dei SS. Pietro e Paolo dated 1600, and the XVII century Chiesa di S. Sebastiano, that has a typical baroque facade.

The most outstanding urban structures are the Palazzo comunale, 1659, preserving a rich portal, and the Palazzo Modò preserving beautiful illustrated brackets. Also singular are the Terme di S. Venera (thermal baths), an imposing thermal establishment with a neoclassic facade, dated 1873.