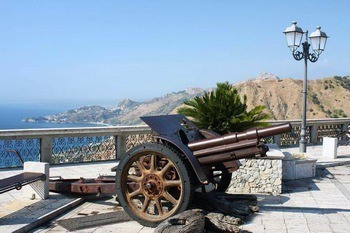 At the Bossâs table you can try a typical âgranitaâ or have a beer, and if you wish you can visit the church of St. Nicholas, where the Godfatherâs wedding took place.

This typical Sicilian town, with lots of small alleyways that face the sea, was chosen by Francis Ford Coppola who was attracted by numerous landmarks, one of which was the church of âSantissima Annunziataâ.

This classic tour takes 4 hours, but on request - booking in advance and at an extra charge - the Godfather tour can go on to visit the âCastello delle Schiaviâ, a small, noblemanâs palace in Fiumefreddo, famous as the residence of the Godfather. With this extra visit the tour will last 6 hours.

Also at an extra charge, and with advanced booking, it is possible to request a visit to the lovely town of Motta Camastra, built on a sheer cliff in the valley of the Alcantara river, where Michael Corleone with his âpicciottiâ (followers) began his life as a fugitive.

Visit these legendary movie sets, unchanged locations from âThe Godfatherâ - one of the most emotional excursions offered by New Travel Services.